Heritage Screener: Western Cape Coastal Access Strategy
South Africa and the Western Cape has a long history of humans interacting and utilizing coastal environments – stretching back thousands of years and evidenced by the Earlier, Middle and Later Stone Age archaeology that occurs along the Western Cape coastline. In light of the acknowledgement of the relationship and interaction between sustainable development and the redress of inequalities, CTS Heritage was requested to assist with the development of the proposed Western Cape Coastal Access Strategy through the identification of 'places' or 'objects' of cultural significance, as defined in terms of the National Heritage Resources Act, 1999 (Act no. 25 of 1999), that have been identified by the Heritage Authorities as either Grades I, of National significance, Grade II, of regional or Provincial significance and Grade III, of local significance, either located within, or within close proximity to, the coast to determine what the status quo is of formally identified or prospective heritage significant areas along the coast. To this end, CTS Heritage developed maps and inventories of known and graded heritage resources along the coastline of each of the 15 municipalities that have coastlines in the Western Cape.
Client:
ACRM
ProjectDate:
Wednesday, February 15, 2017 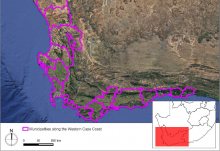